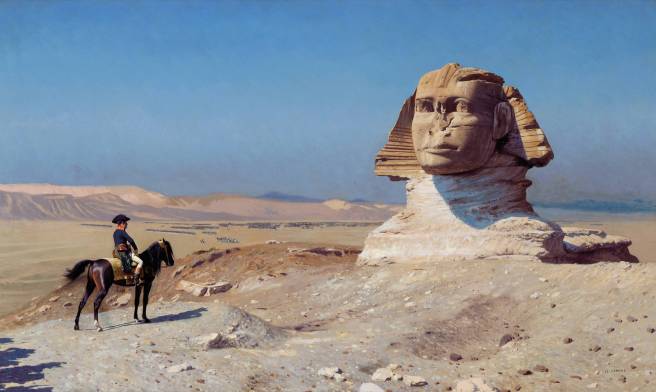 Bonaparte Before the Sphinx – Jean-Leon Gerome

What have I really learnt from the book that I am currently reading?

It has taught me a lot about leadership. In fact, it might be said that Napoleon has become a mythical figure in my mind, thanks to this book.

Whereas before, he was always treated a bit like a villain. After all, I’ve rooted against him, for the British, in one of my favourite Napoleonic series, Matthew Hawkwood.

But what has stuck out to me, is his ability to properly encapsulate all the good elements of the French Revolution and combine them with his efficient and rational administration.

To read the Napoleonic Code is to see how much of an influence he has been on modern legality and law, how people are treated and what an incredible forward thinker he is.

These are all the tenets of leadership that I wish to emulate.

I wish to be rational, smart and efficient in all the decisions I make, without compromising my creativity or my ability to dissect, interpret and analyse a situation clearly and objectively.

What really stunned me though, was his ability to flit between a myriad of subjects and topics and issues without losing track of them all. To move troops in the heat of battle is already an extremely daunting task, to control and co-ordinate the logistics, the supplies, the communication and grand strategy of the Grande Armee; an even more challenging effort.

But he was reported to even give instructions on Parisian opera whilst as far away as Austria, to be judge and jury on local police cases and install local governments loyal to him, whilst fighting Austrian forces and on 3 or 4 hours of sleep. He could remember individual soldiers, their families, their unique traits and thank them personally for their efforts.

However, my mind is a mere scatterbrain in comparison to his. His genius was only matched by his ego and favouritism.

I, myself have an extremely large ego, for one with so many flaws, (not particularly handsome, slightly overweight, and the aforementioned ego), but such confidence in myself is only matched by the charisma I wield.

I am quite sure though, I lack a lot of his heart. As a leader, I think I’ve shown a fair amount of ruthlessness and displeasure when treating a lot of my subordinates. Compliments are exceedingly rare, with an emphasis on negative feedback and dispassionate analysis of people’s performance.

I don’t particularly favour anyone. I use them to the hilt and almost abandon them if they start to show cases of inefficiency or cannot get “simple” tasks done in my head.

In that sense, I feel I am a better leader in that sense than Napoleon …. but this will mean I will never be great. His mere presence could inspire troops to work, fight and die for him. He trusted a lot of people around him, even though he shouldn’t have. This was his downfall. His nepotism, favouritism, blindness to obvious traitorous people in his court was the ruin of his empire.

I almost trust no-one to fully fulfil their tasks, and end up doing a lot of the work myself.

But then I work in a volunteer environment. Commitment, discipline and order are not common words associated with them. A lot of volunteers slack off, because they aren’t getting paid. They consider me as their friend, not their boss. They believe themselves exempt from my criticisms and pressure.

The most telling sign, is their lack of communication and failure to properly help me.

And that is partly my fault. If I inspired a sense of duty in them, they would work a lot harder. If I didn’t treat them so coldly and dispassionately, they would be more inclined to communicate with me more.

But that is something to work on for the future. Currently, all I can do is continue to shoulder the brunt of the work and heave this ridiculous behemoth of an event across the finish line.

Another similarity in leadership I’ve discovered, is what being a linchpin or a keystone is. I absolutely hate being the person who, if removed, injured or out of the picture, the entire endeavour collapses.

It’s not the pressure, the workload, the concept that irritates me. It’s the lack of creativity and ability in the people I lead that annoys the shit out of me. I dislike being so valuable, that if I was gone, all the work I’ve done, all the effort I’ve put in and the legacy that could have been, is instantly gone.

Napoleon suffered from a similar predicament. None of his generals and marshals could fight properly without his guidance. Legislature and governance could not function at its peak efficiency and fairness if he was entirely absent from the system.

I can’t help but think what would happen if I had someone who, in their brilliance and discipline, could surpass me.

Finally, I would think to myself …. an worthy heir of the empire that I have built.

Would I hate them?

Of course. They are better than me. But at the end, I would respect their genius and move aside. For I am now obsolete.

That is the ending of all leaders. To be surpassed. But whether you are overtaken by someone better is the dream.

Am I getting tired of all of this? How am I not buckling and collapsing under all the pressure? Am I starting to buy into my own bullshit about being a capable leader?

That is the answer to all three of those questions.

Am I good at my job? Maybe. Just once, though, I would like someone to properly critique me and do a proper dispassionate analysis. It’s always me analysing me.

I want to be picked apart.

Because I want to rejoin the puzzle pieces of me together, the right way.

It’s like doing a Lego set, but by the time you finish, you realise there are 5 extra pieces that should belong on the set.

So you have to pull it apart, find spot where you messed up and put it together again.

So just how the fuck am I suppose to get better?

There’s only so much analysis I can do on myself and my performance. I need fresh eyes, and they have to be cold, objective and rational.

Anything else just wouldn’t resonate with me. Because I’ve done the emotional thing …. and it doesn’t work on me.

I adore my team. I’m grateful for all they’ve done for me.

It just feels like I’ve done too much at the moment. Like they’ve taken more from me, than I from them.

As leader, you’re the foundation. You’re meant to hold everything up. You’re Atlas and the entire world is on your shoulders.

Can I keep this up? Probably. But its wise to look for a protege.

Or maybe I shouldn’t. Empires rise and fall. I should let mine, if I ever have one, fall with grace.

Why should I leave behind a legacy? Why should it be squandered by someone else?

But aren’t all leaders just a little bit like that?

One thought on “Napoleonic Lessons”