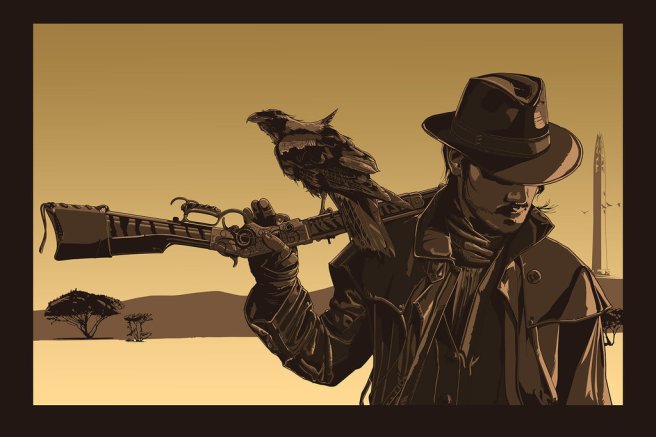 Set in a none too distant future …. where a world has gone mad.

Part 1 of a mini-series.

The earth was scorched red, through centuries of exposure to unyielding sunlight and what greenery there was, was sparse, coarse and rough. The sky was endlessly blue, with little cloud cover and mountains, hills and mounds ebbed and flowed endlessly across the horizon.

In this inhospitable environment, nothing moved if it didn’t have to. The native fauna, sought cover and water and stayed close when it could find it.

However, out of the shimmer, rode the Bushranger.

Swaying atop a camel, his long gun slung over his broad shoulders, and his gloved hands lightly holding the reins, the Bushranger cut an intimidating figure.

An Akubra Cattleman shielded his face, casting his piercing emerald eyes, and tanned, rugged features in perpetual shadow. He wore a loose scarf, that could double as a mask, a wheat coloured Brompton jacket that hid a dark green vest, and matching straw-coloured jodhpurs that ended in calf length reddish brown boots.

The camel, a trusted creature, was adorned in a rich tapestry that echoed the colours of the outback, and had two saddlebags on either side, that carried all the supplies the Bushranger could need.

He had been travelling for close to two weeks in the wild. In spite of the hardships, and that close encounter with a pack of dingos, he was still physically fit, mentally alert and in full control of his faculties.

Scanning the horizon, the Bushranger took out his pocket monocle from a pouch on his belt, and saw signs of civilisation almost 3 kilometres away. Pulling out his map, he checked the direction he was headed with his compass, and urged the camel from a slow gait to a faster medium trot.

Coober Pedy was a town that boasted a population of less than two hundred people … and it liked it that way. Formerly known for its opals, and dugouts, Coober Pedy was one of those places that had remained largely untouched by the Great Fire event due to its remote location and self-sustaining nature. The fact that it was so far from any coastline, had a lot to do with its survivability, and it served its purpose as of the 7 GAFA (Great Australia F**k All) towns left on the continent.

Governance was feudal at best, and savage at its worst. Families fought one another regularly but they were bonded together by their hatred of outsiders. The Crazy Coobers was a real phenomenon that described any situation where a coastal stranger entered their town, and found themselves driven out by sheer tribalism attitudes. Yet, they still had to answer to the Spring Law, and so, when the Bushranger entered, with a corpse in tow, they didn’t react as per their reputation.

Instead, they merely trained their guns on him.

To their silent relief, he kept moving, through the main thoroughfare, and when he did stop, it was in front of the Sheriff’s office.

Looking around at the litany of guns trained at him, from rooftops, to basements, the Bushranger ignored them all, and focused his attention on the corpse that was used to smell but had since been thoroughly dried up by the desert conditions.

The face was handsome once. As were the lively eyes. Both had been shot out, leaving only congealed jelly behind in empty sockets. But the bounty was still recognisable. The clothes were ripped from endless rocks, grass and dirt. Even the flies had left the corpse alone.

Dragging it to the entrance, the Bushranger gave a polite knock, before bowing his head to enter.

Sheriff Taylor was an overweight bureaucrat, who preferred creature comforts to anything resembling police work. He was elected by the populace, on accounts that he let everyone do whatever the hell they wanted, and got paid accordingly in the only currency that mattered … water and food.

Looking with distaste, at the Bushranger, he set down the pen he was using and peered beyond the tall figure.

“Ah Christ …. Jono, would you look after this for me mate?”

Deputy Jonathan stood up from his desk and motioned towards the back.

The Bushranger nodded and stepped back out, to take the corpse to the rear of the office.

“Good work on this guy. Did he give you any trouble?”

Hearing no reply, the deputy shrugged.

“Well, you didn’t seem to come off any worse for wear. Here …”. The deputy tossed something towards the Bushranger.

Catching the pouch, he pinched it open and nodded with satisfaction.

As he turned away, the deputy whispered something.

Making no sign that he had heard, the Bushranger kept moving, and walked across the thoroughfare, and into the gun shop.

Hendricks, was just like the drink. Dark, stout and rare. He was one of 3 gunsmiths left in the entirety of the GAFA, and the long rifle that the Bushranger had slung over his shoulder, was a personal gift from smith to saviour.

The Bushranger, slid across the pouch and added two more from his belt.

Hendricks slit them open, and examining them closely, grunted affirmatively.

Walking to the rear, he came back with 2 boxes of ammunition and a small telescope.

Loosening the rifle from his shoulder, the Bushranger placed it gently atop the wooden bench-top, and watched as Hendricks installed magnets atop the rail of the gun. Hearing a satisfying click, as the telescopic sight mounted itself atop the gun, and with little effort, pull apart again, Hendricks placed the sight into a clip-on pouch and handed it over to the Bushranger.

Affixing the pouch to his belt, the Bushranger nodded in gratitude, and walked back to his camel, where he leapt atop, and with a quick flick of his wrist, untethered the beast.

Riding out of town, he urged the camel on for a quick trot.

Nearly an hour later, the Bushranger saw the twin landmarks of the Breakaways, a mass that was once covered by sea, now native fauna. White, gold, red, brown mixed seamlessly in a picturesque and untouched manner that only millions of years of landscaping could design on land.

Finding a shady outcrop of rock, and bushland, the Bushranger grabbed the bundled up mattress from the camel, and placed it on the floor. Driving a stake through the ground, and undoing the bit from the camel’s mouth, he allowed the girl to wander, and find water, whilst he searched for firewood.

It was only an hour later, when the sunset was beginning to turn into darkness, when the Bushranger finished his sparse meal of salted kangaroo jerky, and lightly cooked witchetty grubs, that the deputy came out of the bloom on his horse.

With one hand by his pistol, the Bushranger motioned the deputy to stop at 10 paces away.

The Bushranger predictably said nothing to this useless statement.

“Look, I got another job for you. Its about my daughter, Grace.”

Pausing for dramatic effect, but greeted with an anticlimactic response, Jonathan continued weakly

“She was kidnapped a week ago by the Feral Children. You have to help me, she’s all I’ve got left.”

The Bushranger tilted his head slightly at the news.Then he made a rubbing motion with his fingers.

“We’ll give you at least triple the amount you saw in the pouch for that last bounty.”

The Bushranger opened his mouth, and allowed his jaw muscles to unclench. His voice, gruff, rough and gravelly from a lack of use, sent chills down the Deputy’s spine.

I think I really like the world I’ve created here. Its meant to echo current fears about climate change, in which I made a bold natural disaster known as the Great Fire wipe out all coastal towns in Australia, thus only leaving those tiny places in the outback as the final frontiers/settlement left.

Spring Law, is of course my play on Alice Spring, which acts as the major form of governance in a ruined Australia, that echos a little bit of Mad Max and my inspiration for this post, The Mandalorian.

You can probably see the clear references to the titular character, in the Bushranger.

I still got a lot of work to do though, with pacing and how much world-building is needed, whether I can trim down details or just overall improve the mood of the story.

As always, if you got feedback, message them to me!

However, stay tuned for part 2, next week.

One thought on “The Bushranger”