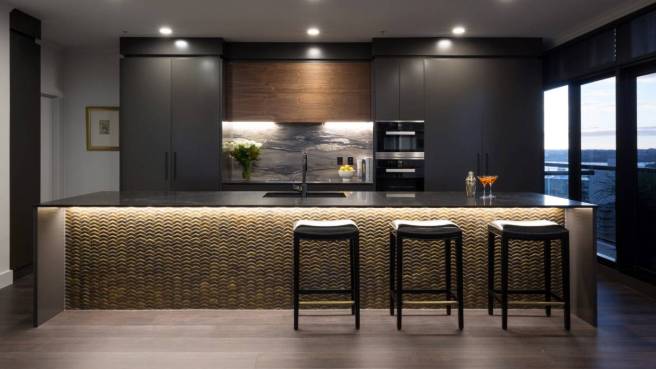 The man started by wiping down the table.

With a sharp flick of the wrist, the towel was dampened under the running water, and hung on a small hook, neat, loose and ready for use again.

Bowls, boards, and knives were neatly arranged on the table, as per his usual layout, Knives on the right, straight up, boards in front of him, with the smallest bowl on the left and getting larger to the right in a neat semi circle around the board.

Pirouetting around, he began firing up the gas stove, its dark glossy ceramic finish sparkling under the blue flame.

Placing his phone a bit further away from his cooking station, the man made a minute adjustment, via the device, to the lighting of the kitchen, casting everything in a warm, functional amber light.

Taking a pair of pink-red salmon fillets out of the large sliding door fridge, he let them rest in a metal bowl, and set up a pair of pans on the stove.

Letting them warm up sufficiently, he lightly glossed one with a smattering of olive oil, while the other he poured half a cup of olive oil.

Reaching down, he took out a large pot and poured instant boiling water into it, while reaching into a glass jar and with circular motions, began to salt the water.

Placing it on the stove, he grabbed a bundle of dry linguine, and placed it gently in the water, stirring it gently with a spoon, every so often.

Taking a half head of garlic, he sliced them thinly, the knife moving in quick, precise cuts, always nearly grazing his knuckles.

Running the knife under the water, he slid open the fridge, and took out flat-leaf parsley, and ran them both under the stream.

The sizzle of both pans caused him to spin around and deftly place the salmon and the sliced garlic in both, the salmon receiving an instant sear as the pink skin kissed the simmering oil and heat.

The garlic, hissed slightly as the pool of oil made contact and began to brown the edges.

Taking out three dark, light and wood mills, respectively pepper, salt and red pepper flakes, the man added flavouring touches to the salmon with the salt and pepper, the garlic with the dark red peppers.

Cutting through the parsley, with the same precision and speed he performed on the garlic, he lifted the board and slid the chopped pieces into a bowl, the green colour shining through the clear glass.

Taking a large wooden handle carving fork, he flipped the salmon onto its skin and added a couple more touches of pepper and salt. Pleased with its consistency, he took out a couple of large ceramic grey plates and placed the salmon atop with the skin facing upwards, crisp and orange-pink.

Turning his attention to his pasta, he deftly tossed the linguine into a sieve, the slight hardness indicating their ever-so-slightly under-cooked nature and gave a couple of tosses of the pan to mix the garlic, oil and red pepper better.

The linguine splashed into the oil, along with a quarter cup of the pasta oil, and began to sizzle immediately, filling the kitchen with an intoxicating smell of garlic, extra virgin olive oil and a hint of spice.

Mixing vigorously, the man held the bowl of chopped parsley high, and waited for a second, before throwing the contents atop and watching the parsley shrivel slightly from the heat.

Walking back to the fridge, he extracted a single lemon, deftly sliced it in half, flicked out the seeds and drizzled the an entire half atop the pasta.

Pleased with the colour, he held up a single strand and taste tested it, before adding a tiny crack of salt and then using the carving fork, he twirled the pasta around it and made a neat circular pile atop the ceramic plate, next to the crispy salmon.

Leaving a plate behind for himself,  he speared both with elegant bone handle forks, and carried the second plate, the smell and vapor lingering in its wake, to his apartment door.

Opening it, he entered a lift and travelled to a floor halfway to the bottom, but not quite.

Looking for the right combination of letters and numbers, he knocked once firmly, before leaving it on a small tray next to the apartment door and swiftly moved back to the lift and into the sanctuary of his penthouse.

Where he ate alone, staring out at the city-scape, lit up by 20 million people, imagining what it would be like to cook for the woman in the apartment below him, with her watching …

The woman opened the door and smiled when she saw the bowl of pasta and salmon. The ritual had been going for months now. Every Friday, a stranger would knock precisely between the times of 7.30pm to 7.45pm and deliver a delicious meal.

Other nights, it was a delicious fatty smashed burger, impossibly tender beef patties with cheese oozing out the side, and french fries cooked to a golden, yellow, salty crispness that belittled other fast food competitors.

The menu always changed and she was always shocked at the quality of ingredients and skill in preparation and cooking.

She would try to look through the keyhole, but he always avoided it and would vary the timing of the delivery so that she could never catch him, despite her running swiftly to the door to catch him when she heard the knock.

She even knew the type of knock he would give now. It was the kind that was firm, and precise, unlock the knocks she heard from her neighbours who complained about her playing music at 4am, or the online delivery man who leered at her whenever he arrived with her package.

Out of gratefulness, she bought a small coffee tray and had it match the type of cutlery and plating he always used. It was too expensive, but the meals she was getting, every Friday, despite her meager salary was something she didn’t want to miss.

She also had to find a way to return the plates and beautiful forks. And without fail, by Saturday morning, they had disappeared from the dark tray outside.

She had no idea why this was happening to her. She had wondered whether this was something that happened to people regularly in this apartment building, as she had only moved in recently, but no one had ever received such delicious food gifts.

She asked everyone she could meet about the limited details she knew about the man, but no one had any reports of anything strange happening.

She only even knew it was a man, because a neighbour told her while that he was locking the door, he had seen a man in a white dress shirt, and suit pants that definitely didn’t live on their level, enter the lift, smelling of the delicious food in front of her door.

What else did she know about him? Precious little.

She only knew that she was desperate to meet him, to thank him, to talk to him, to find out more about him. She had so many questions.

But at least one of them was answered …

What meal would she get on Friday?

I wrote this whilst simultaneously bored out of my mind at Miniso, and insanely hungry after working 6 hours straight from 9am.

Needless to say, looking up how to make this dish didn’t help the mental hunger either.

And … my lunch was decidedly less delicious and decadent sounding than what I wrote here … a boring chicken wrap with chips.

First time I’ve ever wrote a cooking segment though. Was fun adapting the recipe to make it sound a bit more sensual and interesting than:

“Heavily salt a large pot of water, and bring to a boil. Cook pasta until slightly underdone while completing the steps below.”

Does everything need to sound so dry?

This was also a tiny bit inspired by a visit to a luxurious kitchenware store in Chadstone.